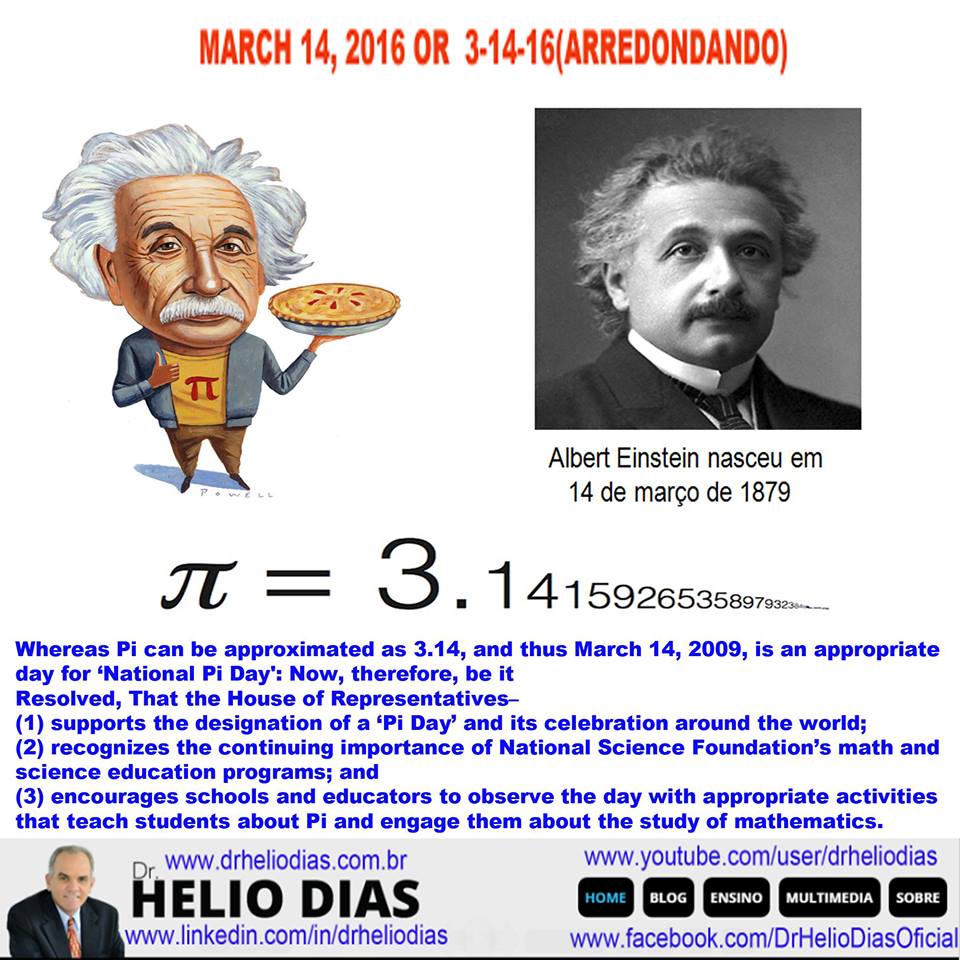 Um exemplo de iniciativa para nossos polÃ­ticos brasileiros!
Veja :Porque devo aprender a MatemÃ¡tica?
Â
IN THE HOUSE OF REPRESENTATIVES
March 9, 2009 RESOLUTION
Supporting the designation of Pi Day, and for other purposes.
Whereas the Greek letter (Pi) is the symbol for the ratio of the circumference of a circle to its diameter;
Whereas the ratio Pi is an irrational number, which will continue infinitely without repeating, and has been calculated to over one trillion digits;
Whereas Pi is a recurring constant that has been studied throughout history and is central in mathematics as well as science and engineering;
Whereas mathematics and science are a critical part of our childrenâs education, and children who perform better in math and science have higher graduation and college attendance rates;
Whereas aptitude in mathematics, science, and engineering is essential for a knowledge-based society;
Whereas, according to the 2007 Trends in International Mathematics and Science Study (TIMSS) survey done by the National Center for Education Statistics, American children in the 4th and 8th grade were outperformed by students in other countries including Taiwan, Singapore, Russia, England, South Korea, Latvia, and Japan;
Whereas since 1995 the United States has shown only minimal improvement in math and science test scores;
Whereas by the 8th grade, American males outperform females on the science portion of the TIMSS survey, especially in Biology, Physics, and Earth Science, and the lowest American scores in math and science are found in minority and impoverished school districts;
Whereas America needs to reinforce mathematics and science education for all students in order to better prepare our children for the future and in order to compete in a 21st Century economy;
Whereas the National Science Foundation has been driving innovation in math and science education at all levels from elementary through graduate education since its creation 59 years ago;
Whereas mathematics and science can be a fun and interesting part of a childâs education, and learning about Pi can be an engaging way to teach children about geometry and attract them to study science and mathematics;
Â
Â
Â
ï»¿